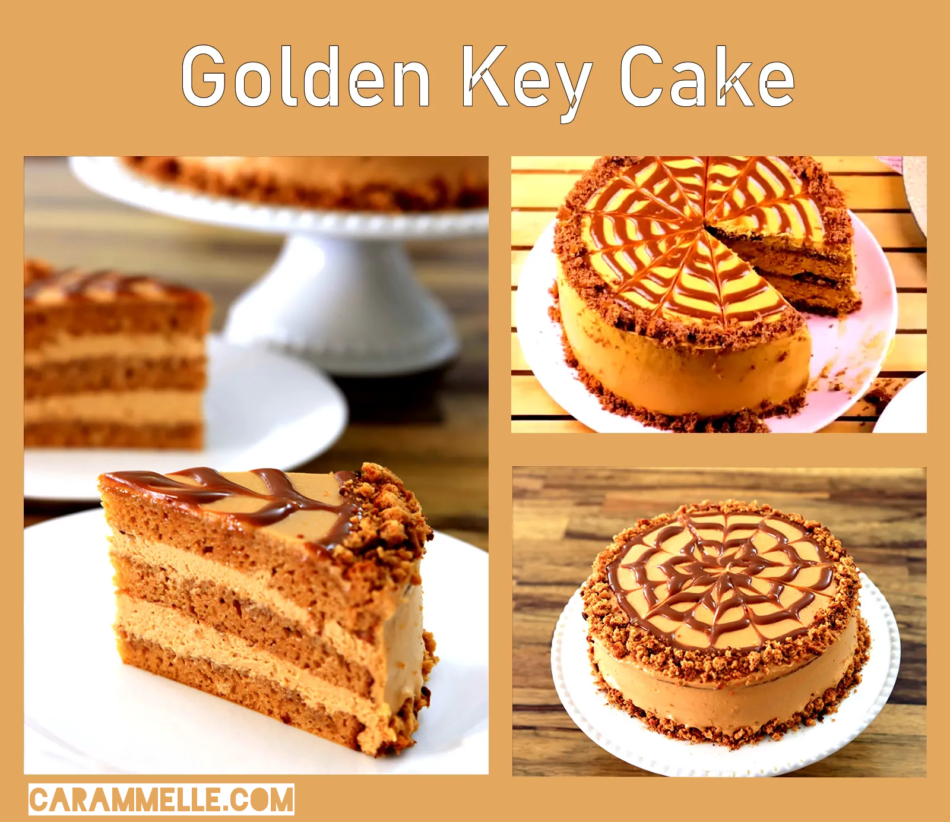 This dulce de leche cake (golden key cake) is super soft and moist, the buttercream is rich with extra caramel flavor, in between a tiny touch of hazelnuts.

This caramel cake is one of the best desserts I’ve ever made.

Line three 8-inch round cake pans with parchment and, grease with butter and dust either flour. set aside.

In a large bowl whisk eggs and sugar, until doubled in volume, about 5-6 minutes.

in a separate bowl stir sour cream with baking soda, then add to the egg mixture and beat until incorporated.

Sift flour, baking powder and salt. Stir until incorporated. Do not overmix.

Divide the butter between the pans.

Bake for 16-18 minutes, or until a toothpick inserted in the center comes out clean.

then, cut the tops of the cakes.

Set aside for later.

Bring to a simmer until the sugar is dissolved, set aside.

in a large bowl beat butter until cream cheese until smooth.

Add dulce de leche and beat until incorporated and smooth.

In a separate bowl neat heavy cream to medium peaks.

Fold the whipped cream into the butter mixture.

Transfer to a piping bag (optional).

place first cake layer (cut side up) in the middle of the platter, soak with the syrup.

Spread/pipe a layer of the cream, sprinkle 1-2 tablespoons of crushed hazelnuts.

place the second layer of cake, soak with syrup, spread another layer of cream, sprinkle hazelnuts.

Place third layer of cake (cut side down), soak with syrup.

Spread the remaining cream over top and the sides of cake.

Decorate the cake with the crumbs.

Refrigerate for at least 3 hours before serving.